Sleeping in on a weekday is so wonderful. My host had to work, so she took me out for breakfast before heading to the office. I spent my first morning in Fresno doing very little. After writing and an episode of Orphan Black, I got a little more up-to-date on my woefully unread RSS feeds and then decided to go for a walk before lunch. There was a large park within a mile of where I was staying, so I made that my destination and headed out.
Though the walk itself was uneventful, there were plenty of little reminders that I wasn’t in Illinois. Obviously, there was the weather and the vegetation. It’s nearly impossible not to have a massive palm tree in your line of sight. There were less tangible things, as well. The roads are wider, with more lanes in either direction. There is simply more space. I noticed the same thing in LA.

I found a nice local place for lunch called The Starving Artist Bistro. One thing I love about warmer climates is eating outside, so I took a seat on their patio. I had a Bistro Beef sandwich with a Bistro Side Salad. Both were fantastic. It was a light but filling lunch. Afterward, I took a short walk around the mall the bistro was located in, and stopped at a Starbucks to get myself an iced chai latte.
I sat outside with my drink and finished up my write-up for day one. While I wrote, the most fascinating-looking young woman walked into the cafe. She wore a frilly white summer dress with a black leather corset and black fingerless gloves. The contrast was striking, but I honestly think it looked good. I internally dubbed the look “Summer Goth,” and pondered asking to take her picture, but ultimately decided against it. 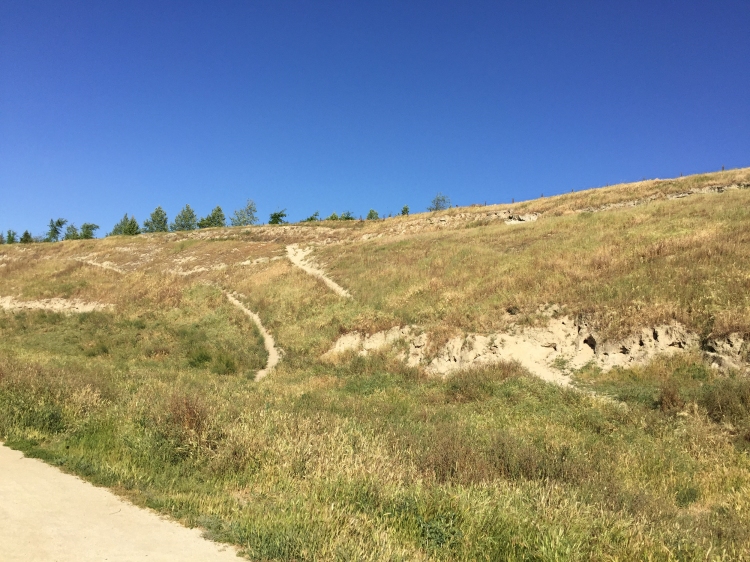 After finishing my blog entry and my drink, I left the mall and headed to Woodward Park. Unfortunately, the years-long drought in California has left this normally vibrant and green landscape in shades of brown. The edges of the park were lined with trees that still looked strong and alive, but the further I delved into the landscape, the more dry everything became. Beyond some insects I saw no wildlife. A man-made lake was completely evaporated. The exposed rock faces and vast field of the park retained some level of majesty, but it was plain to see that the lack of rain had taken its toll on the area. There were spots where vegetation had completely failed to grow, leaving empty spaces like scars on the face of the earth.
On my walk home, I saw a stray Siamese cat prowling around the strip mall I’d visited earlier. It darted between the back doors of several businesses before sneaking into a small viaduct and disappearing from view. Further along, I saw a bluejay and red squirrel resting near one another. However, they perked up and darted out of view before I could get a picture of them.

Upon returning to my host’s home, I posted my blog entry for the previous day and cracked open my moleskine to take notes on the current day. When she finally made it home from work, my host and I went out to dinner. The first stop, an American-style chain, was packed to bursting and had a forty minute wait. We instead went to our backup choice, a Peruvian restaurant called Limón. This was my first time having Peruvian cuisine, and it was fantastic. I had Saltado de Pollo, and my companion had ceviche. We each had a glass of sangria and enjoyed our meal thoroughly.
After dinner, we retired for the evening and planted ourselves on the couch. After finishing the rest of Wreck-It Ralph, we played some cooperative Towerfall and Helldivers before finally calling it a night.